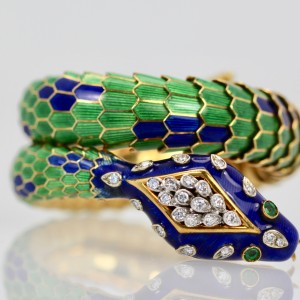 The history of Snake jewelry has been around since Egyptian times.  The snake one of the earliest and culturally diverse symbols in jewelry. Since Adam and Eve in the Garden of Eden, this slithering serpent has represented a host of different meanings to different cultures.

What paved the way of the Snake to become iconic?

For the pharaohs of Egypt, snakes represented royalty and deity. They wore them as sacred pendants. The Romans had different interpretations as everlasting love to a symbol of wisdom. Similarly, the Greeks considered the snake to represent wisdom.  Also, this is why the Greek God of medicine, Aesculapius has a serpent wrapped around his staff. It is still the symbol of the medical profession today. Hindus, Hebrews, African, Nordic and Native Americans have various meanings from re-birth, transformation, sexuality and desire symbolized by the snake. The Chinese believed the snake had close relationships with the Gods and they were able to prolong life. The snake is still a symbol of reproduction and good luck for the Chinese.

What makes this creature so intriguing?

It’s the fascination with good and evil. Although Cleopatra wore snake jewelry head to toe, it wasn’t until 1839 that the snake became one of the most iconic motifs in jewelry. Prince Albert when he proposed to Queen Victoria, gave her a continuous snake ring, which signified everlasting love for eternity. This ring also possessed an Emerald head the Queens birthstone, this set a trend for snake jewelry throughout Europe, snake rings, coiled-style bangles, flexible necklaces, brooches and pendants. By 1840, the world was in love with snake jewelry and those who could afford such luxuries, indulged. By 1857 less affluent women began to make their own snake jewelry from hair, cord, silk, steel beads.

A new “dark” era of the Snake jewelry

After the death of Prince Albert in 1861, the whole of England was into mourning and now snake jewelry was created in dark materials such as jet, vulcanite, gutta-percha, wood, hair, onyx, ebony and bog oak. They were sometimes set with pearls and other gems such as garnet ruby, emeralds, amethyst and Diamonds.

The Art Nouveau movement and the Snake

The Art Nouveau movement circa 1890 to 1910, continued a love of snake jewelry using an even broader range of materials such as Ivory, horn, tortoise, shell, glass
and colorful enamel work. These pieces were naturalistic and delicate. As the movement moved on the Deco pieces took a turn with a stylized twist and more gemstones and diamonds and solid gold was used.

Today — the Snake in the world of High Jewelry

From the 1940’s to today many fine jewelry houses still carry and continue to re-design snake jewelry, such as Boucheron, Bulgari, Cartier, David Webb, etc.

The house of Bulgari has continued the snake tradition, since the 1940’s. Bulgari Iconic snake bracelet articulated and enameled in various colors still reins supreme. In the 1960’s they put watches inside the head of these serpents and today have designed several new snake collections. Later, in 1968, Cartier made a snake necklace for Maria Felix mounted in platinum with 2,473 Diamonds.  The underside is enameled in red, green and black, so the piece was completely reversible.

Snake jewelry will always be collectable. The range of styles and materials used is enormous and there is always another snake waiting to be taken home. I love snake jewelry maybe because in the Chinese calendar I was born the year of the snake.

I continue to collect and bring to you my loyal customers my snake and serpent finds since there is a style to fit everyone. You’ll see that I have listed different examples from my collection for your viewing pleasure. 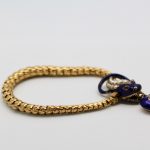 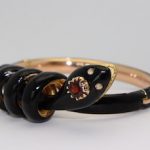 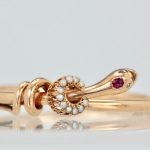 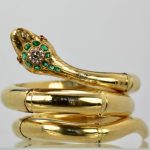 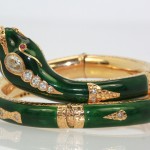 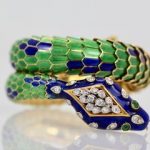 About The Cris Notti